I'm making a patchwork chain for this jade and sapphire water sprite pendant. It will be made of different kinds of chain (some of them antique), semi-precious and antique beads and sea weed links in sterling. I'll put up a photo of it when it's done. 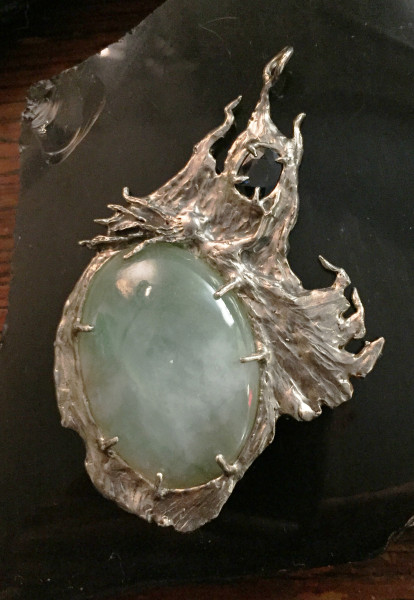 Size is about 2.5 inches. It's sterling with a stunning Burmese jade cut by Lloyd Eshbach and a _very_ dark blue sapphire. The silver seaweed links are going to look beautiful with it. I mostly don't show this big but I wanted folks to see the detail. From the collection of Bayla Fine.

I think I'm finally able to polish so there should be more new work up pretty soon.

I'm finally almost better. It's been a long month! Still have a bit of a cough so I can't polish yet.

But I am back working in wax. It feels great. Still moving a bit slowly

Photos are of a pearl and an opal I'm thinking about designs for. 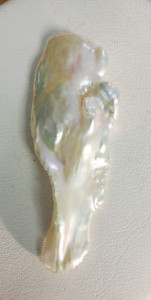 Pearl will makee a baeutiful wing for a bird. Shape is perfect. It changes a lot in different lights so thephoto is just catching it in a moment. Its about 2" long 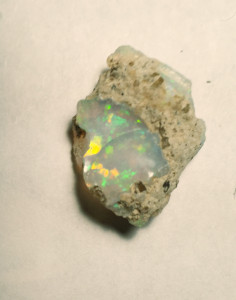 Opal in matrix is Ethiopian. I could have the opal part cut into a finished stone but iI like the way the matrix and the opal work together. Colors are even more brilliant.

It feels really good to be back in the world and making art.

I’m taking an artists sabbatical this winter, so unfortunately I won't be at
Boskone this February.

I'll very much miss seeing everyone this year but I’ll look forward to seeing you next year!

I’ve been getting over a bronchial bug for the last few weeks. (It seems to be going around everywhere.)

I’ve been resting and working on getting over it, and not working on jewelry so I haven’t been posting here.

This engagement ring of Joanna Lowenstein’s is the last piece I finished before my holiday break.

The boulder opal pendant/ sculpture and the Fordite design are cast in silver and as soon as I’m completely OK I’ll be polishing them.

Have lots of design work going on in my head.  Hope to be back to posting regularly soon. 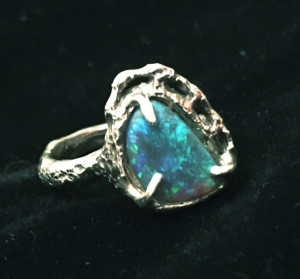 I’m finishing the miniature of the Irish setter puppy. It’s very detailed and I keep doing a little more work.

And I’m also doing more work on an opal pendant/sculpture that I thought was done but now I want to put a few last touches on it.

The photo is of the opal for that pendant/sculpture. It’s 2 inches high and simply stunning.  I’ll put of a photo of the finished design. 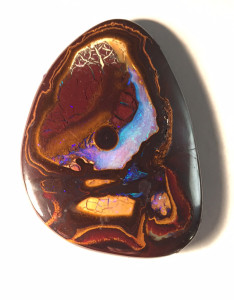 I’ve been working on a very painterly piece of Fordite that’s going to be a large tack (pin). I’m doing very subtle patterns in the wax that will set off the vivid colors in silver.

And I’ve finished the next to final version of a  7-section abstract asymmetrical silver and diamond necklace. Now I need to let it sit for a while before I make the final changes.

And I'm working on a major pendant/sculpture with a stunning opal.

The photograph is of a pendant set with rock crystal that has goethite inclusions. Only goethite would have the red flashes. (The white in the photo is a lamp reflection.) It’s about 1 inch high and the design is in silver.

Goethite (FeO(OH)), (pronunciation: /ˈɡɜːrtaɪt/ gur-tite) named after the German polymath and poet Johann Wolfgang von Goethe (1749–1832), an iron bearing hydroxide mineral of the diaspore group, is found in soil and other low-temperature environments. Goethite has been well known since ancient times for its use as a pigment (brown ochre). Evidence has been found of its use in paint pigment samples taken from the caves of Lascaux in France. It was first described in 1806 based on samples found in the Hollertszug Mine.

This is from Wikepedia. I had no idea that the stone was named after Goethe. 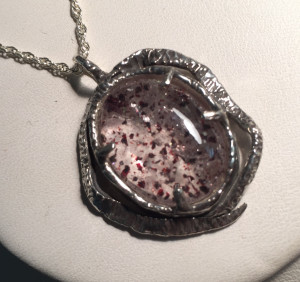 I love the red flashes.

Since all my major books and projects have been portraiture, I was especially pleased to have my portrait of Fumiko Nahamura in the exhibition "Portraiture" at the PH21 Gallery in Budapest (November 24 – December 13, 2016).

Portraiture emerged as one of the most prominent genres of depictive media early in the history of the visual arts, and the tacit or explicit rules, conventions and cultural expectations have always influenced the ways by which artists approached the genre. Photography is no exception; numerous different and characteristic styles of portraiture emerged throughout the history of the medium. Today we live in an exciting new era for portraiture. There has never been a time in human history when so many portraits were produced day after day as in the era of digital technologies. Photographers have responded to the cultural, social and technological changes by reinterpreting the age-old genre of portraiture, and it is always an exciting and rewarding task to organize an exhibition for some of the recent achievements in the field.
PH21 Gallery.
..

I met Fumiko Nakamura through Okinawa Women Act Against [US] Military Violence. In my Women of Japan suite. She was filmmaker and peace activist who retired after 40 years as a school teacher to found non-profit Ichi Feet to document the horrors of the battle of Okinawa and the subsequent suffering.

The photos in the exhibition are exceptional both in the variety of the images and the very different concepts of portraiture. The choice between them was really impossible. I really like the images below and would strongly recommend that you see the whole show.

Me and Myself Elena Santucci

I've been busy carving waxes in my studio and should be back to journaling regularly from now on.

The series of photos below are a necklace that I made for Brenda Clough from exquisite jade that her grandparents brought here when they came from China. Working with jade of this quality is always a joy. Photo of the necklace  - pearls in butterflies are natural pearls. 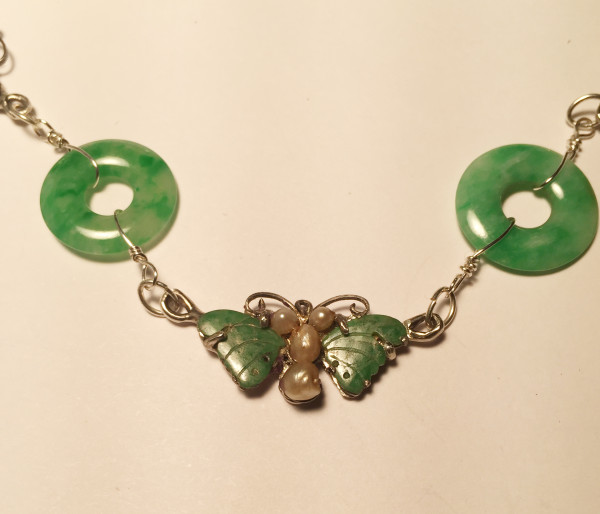 Close up - carving on the wings are lovely. 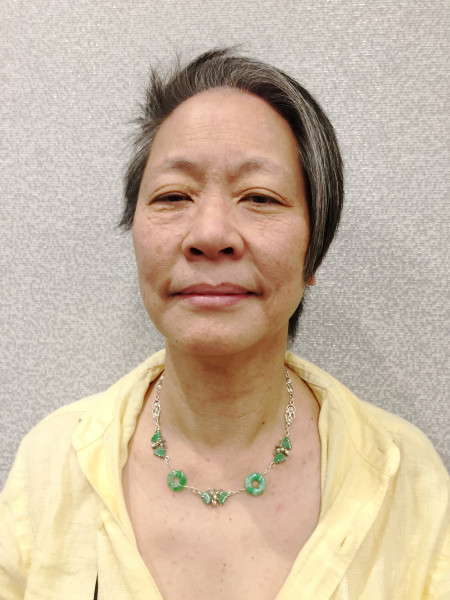 I'm currently working on several new designs including a necklace of asymmetrical textured silver pieces set with diamonds.  i just finished a pair of garnet and peridot earrings in wax. I'm feeling very energized around my work.

I really made a lot of new rings for World Fantasy. I just set and packed the final ring - really lovely mosaic opal.

My boxes with my velvet and displays are also on their way to being packed. I'll be putting chains on the last few pendants, including my "Gorey" cat in silver.

I've been playing with patinas in bronze and just finished a double dragon bronze pendant as well.

I'm brings a jade butterfly necklace commission to World Fantasy and also a water sprite with jade and sapphire. I'll be able to put up the photos when I return. I'm pretty happy with the photos.

I'm really looking forward to seeing folks I know there and catching up.

Still working on designs for World Fantasy Con. I just finished a jet and pearl lacework pendant with roses, and a dragon with pearl, antique Chinese glass and crystal.

Still have some pieces left to polish. 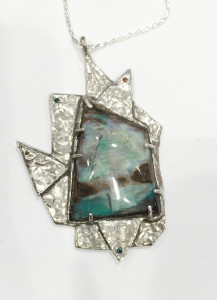 Turkish Colla wood, sterling and turquoise and cinnamon diamonds. Approximtely 2.25". From the collection of Bayla Fine</li>