I've got the jewelry mostly finished for Wiscon. Tomorrow I'm doing the final polishing on the Heyiya-if Kesh symbol from Le Guin's "Always Coming Home" . As I said earlier, it's the first of the Wiscon designs from books by the guests of honor. They cast beautifully and I'm very happy with them.

The engraving on the Charley's wood pendant from Tanya Huff's the "Wild Ways" worked out even better then I hoped. I have a feeling that it's unphotographable but I'm going to try. I have 2 other rutilated quartz cabuchons layed out to think about. This kind of wax engraving is new to me and very exciting. The effects of the quartz in front of it create a whole extra dimension.

The photo is of the Lloyd Eshbach cut jade pendant in gold that I've been writing about. The design reflects 18th century
Chinese paintings. (I've seen number of them in museums and the best of them are exquisite.) The other influence is Chinese white mutton fat jade handing pieces, but they have influenced almost all my jewelry work over the years.

The pendant  includes the classic elements, a cliff, a waterfall and a small pine tree.  I think the work and the jade really speak to each other. 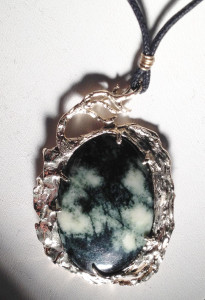