The Stars Change: Pendant Of The City

(crossposted on dreamwidth as laurieopal)

I've been writing about making as pendant for Mary Anne Mohanraj from her book "The Stars Change".  I really like making designs for writers from their books.   I was delighted with how the pendant worked out.

I wrote this while it was a work on process:

"I've been working on  a silver pendant from her book "The Stars Change" for Mary Anne Mohanraj.  I've written about it before.  Tonight I finished the Mughal palace.  (I've been looking at photos of Mughal palaces for quite a while.) The other buildings are mostly carved, although all of them need final work.  The tower of art will have to be last because it's 3 dimensional nature makes it very fragile for a work in progress.  I also blocked out today the warrens beneath the city.  The pendant is less than 2" high and obviously it's stylized.Thought folks might be interested in the quote I'm referencing.


"There were a few other cities on this world, but none nearly so large, so glittering..... The medical complex, bright and white and vast.  .  The mathematical eyrie clung to the side of a mountain, not far below the astronomer's peak.  The psychologists had built themselves a maze to navigate; mastering it was a graduation requirement.  The tower of art centered the campus, a frothy creation of violet spun steel.  And the historians lived within a vast Mughal palace, a testament to the glories of their ancestors."

I sent it to her a while ago and she loved it.  It's  a hard piece to photograph but I think this image gives an idea of it.  If you look carefully at the "warren" in the lower part of the design you can see a cat face (on the right) and a reptile tail (on the left).  They are much more detailed in the actual pendant. 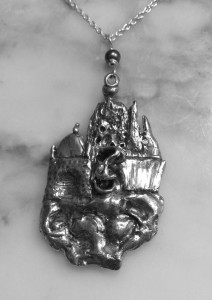 I'm now back mostly making art after spending as always more post travel time than I want ( however necessary) catching up on the support work.  I'm sending the photo for the Chinese exhibition next week and will write more about it soon.
Tags: art jewelry, jewelry, mary anne mohanraj, the stars change
Subscribe