laurieopal, my artist's jewelry diary can now be found at https://laurieopal.dreamwidth.org/ I look forward to seeing you there.

This is my last post until I'm back from my down time. Enjoy the spring!

I made these opal studs for Rebecca Burgess to compliment her other stunning opal jewelry. I was delighted with how beautiful they look. 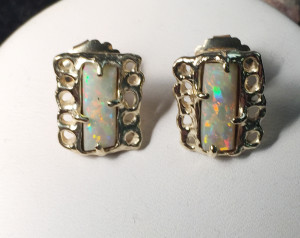 They are actually small studs but I wanted to show them in detail. I love opals.

I'll be imagining jewelry while I'm away.

Fogcon was wonderful. I saw lots of people I really like that I hadn't seen in a  long time. The Memory Landscapes panel was amazingly inspiring and helpful for my work. Deb and I wrote about it on Body impolitic "Old Stories Told in New Ways: Memory Landscapes Revisited"

At Fogcon, I brought Brenda Clough a pendant I made for her in sterling with two stunning green jade fish that her parents had brought out of China long time ago. Actual size is a little over 3". 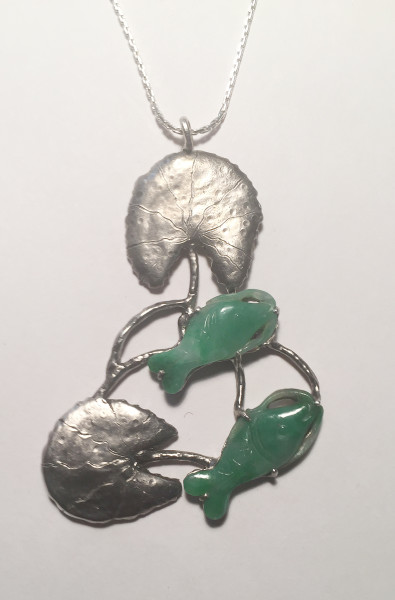 I took a photo of her wearing the pendant. I'm taking some down time finally in a few days. So mostly I'm getting the last couple of commissions in the mail before I relax (photos will follow) and doing catch up work.

I finished my Van gough influenced "Starry Night" design in wax and will be working on it further when I'm back in jewelry after my rest.

Expect I'll post once more before I go on down time.

Almost finished getting ready. Will be able to post photo of jade fish and
lily pads after Brenda Clough comes for it this weekend. Will be doing a Memory Landscapes panel that is also very much going to be a conversation about art and resistance. Something that's very much on my mind.

Looking forward to seeing everyone. And as always, bless my cat sitter

I'm doing the final work to get ready for Fogcon. But thought I'd post about this exhibition here.


Thais Gouveia curated a special issue on the female body for the Bravo Digital Gallery based in São Paulo entitled "The Body At All Ages" (click on the link and scroll to the bottom of the web page). She chose photos on the subject portrayed by living women photographers. I thought her choices were thoughtful and illuminating.

The site is in Portuguese, and I copy edited some texts translated through Google. I think that these are basically accurate.
..

One photograph she chose is my photograph of Queen T'hisha from Women En Large (above).
..

Portrait 4 by Mona Kuhn from her Bordeaux Series.

Born in 1969 in São Paulo to a family of German origin, Mona Kuhn lives and works in Los Angeles. She moved to the United States in 1992, to study at Ohio State University and the San Francisco Art Institute. Her first book, Photographs, was published in 2004, followed by Evidence (2007) and Native (2010). Her work was exhibited and / or included in the collections of the J.Paul Getty Museum, The George Eastman House, among others. The picture belongs to the Bordeaux Series (2011), a collection of portraits and landscapes. In this series, she photographed relatives and close friends in the same red environment, always in the same chair.

Photo of Maryam, a 50-year-old homeless woman living in the capital, by Tahmineh Monzavi.

Monzavi was born in Tehran in 1988. The photographer and filmmaker graduated from Azad Art & Architecture University of Tehran. In her work, she seeks to show hidden groups in Iran's society, culture and art.

Artist at Work by Elina Brotherus.

Finnish Elina Brotherus lives and works between Helsinki and Avalon in France. Always using herself as a model, she decided to deepen this practice in the series Artists at Work (2009), to which the image ... belongs. "Who's watching who? Who is the artist, who is the model? Who gets the 'last look'? ", she says, while posing for artists Jan Neva and Teemu Korpela.

I recommend looking at all of them - the photographs talk to each other.

I had a commission to make jade earrings with sculpted Irish Setter drops. I decided that given how small they were they needed to be puppies so the head could be large enough for the viewer to immediately see the dog and not just a shape. These took forever and required great detail. I worked from a number of photographs including this one I took when I was visiting the actual puppies. Needless to say the puppies were adorable.  It wasn't good light but I got what I needed. I made younger puppies so the head would be more prominent. 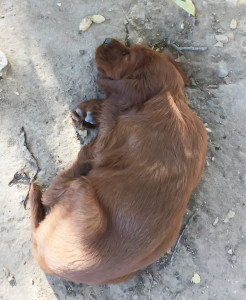 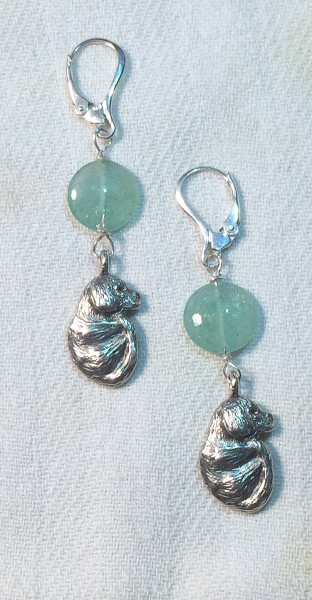 They are a little over half and inch for the silver puppies. But this size photo gives a sense of the detail.

They are from the collection of Wendy Czarnecki.

I'm getting ready for Fogcon and thought I'd post photos of a couple of the designs I'll have with me that are fossils.

Pendant is amber with insect inclusions from 50 - 100 million year ago. Setting is sterling silver. 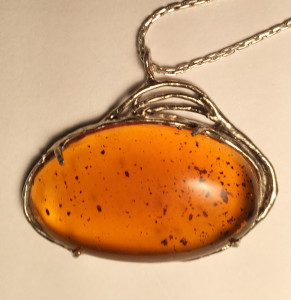 Close up of bug. 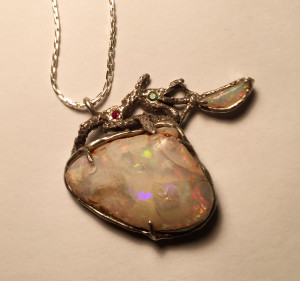 Both designs are about 2 " wide. I love designing with fossils.

Doing final work on a group of commissions that were delayed in finishing because of the flu.  They are cast in metal and need final metal work and setting.

And I'm also been working on a lily pad pendant with Chinese jade fish.  The fish are antique and a stunning green.

There should be lots of photos as each design is done.

Mostly it just feels good to be making art again. 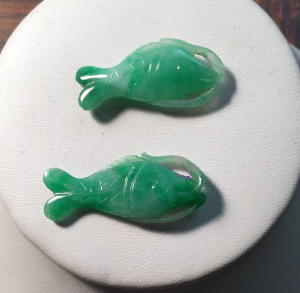 Let me know if you’re interested.  I’m really looking forward to the convention.

Deb and I posted this on Body Impolitic.

As our regular readers know, we don’t usually use this blog as a vehicle to sell our books, and we very rarely hold sales. But this was a good moment to make it easy to give a gift of beauty in hard times.

So: our Valentine's Day sale, from February 5 to February 28 half-price on Women En Large: Images of Fat Nudes and Familiar Men: A Book of Nudes.